Not just another standing mat
Topo is a meticulously designed mat that has been created specifically with standing desk users in mind.
Topo activates static standers.
Introducing Topo
Static standing leads to postural fatigue, which forces people into unhealthy positions. Adding standing position variations alleviates cramping and other discomforts associated with unnatural positions.
The objective of Topo is to unlock the true benefits of using a standing desk by making standing dynamic and keeping users moving and healthy.

The origins of Topo
We know that sitting and lack of movement is bad for us.
Working at a standing desk is a great way to counteract this.
But, standing is only healthier than sitting, if it’s done right.
If you use a standing desk regularly, you know that long sessions on flat ground gets uncomfortable.
Research indicates that static standing is too little stimulation for healthy living.
Making more movements, more often throughout the day, is key to improving health and productivity.

The design of Topo
The inspiration for Topo came from the movements our bodies perform negotiating the varied terrains we encounter when we are active away from our desks.
These movements engage and activate our muscles and improve circulation, benefits that are lacking from static standing.
The team at Topo wanted to mimic the topography that keeps us active and position it where we stand.
After researching, collaborating with biomechanics experts and extensive testing, Topo was created.
Topo has seven calculated terrain features that optimally support the body while standing and stimulate healthy movement.
Moving around on these terrains in a combination of stances, articulates joints and activates muscles. These movements energise, improve circulation and make standing healthier.
The Topo terrain zones 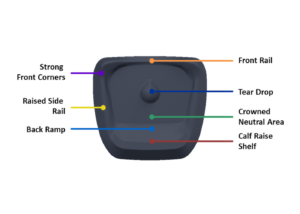 Topo delivers a non flat surface to the space in front of our desks, reducing static activity by making standing at a desk dynamic. Topo keeps users moving and maximises the health benefits of standing.

The below video demonstrates examples of stances that can be achieved with Topo.

There are no reviews yet.

Be the first to review “Topo” Cancel reply